Welcome to our first annual newsletter! Azuki Foundation was established in October 2012 to increase public awareness of Japan and to promote culture and well-being. Through providing a unique series of practical, interactive group workshops specifically designed for older people, we aim use Japanese arts to stimulate the imagination, improve self-esteem and confidence, and promote social contact and health. This newsletter tells the story of what we’ve done over the past year in pursuit of that goal.

To assist our efforts to meet the needs of the communities we work with, and to build upon the trust and confidence we’ve inspired in such communities, we are now registered as a Charity (Registered Charity Number 1157965).

In November 2013, we commissioned a new logo inspired by our aim to encourage people to live healthier and more active lives by embracing Japanese arts and culture. The Art and Design department of the University of Tsukuba http://www.geijutsu.tsukuba.ac.jp/english/ kindly agreed to provide a graphic in response to our design concept ‘warmth and connecting people’.

Each colour within the logo was designed to represent a different aspect of our philosophy: Pink for health, Orange for happiness, Blue for imagination, plus Green for culture and arts. The organic shape of the azuki bean expresses richness and the surrounding bands represent connections between people. We are delighted with our bright and stylish new logo, which will create a strong yet gentle visual presence for the organisation both on and off line.

The Azuki Foundation website, www.azukifoundation.org has been designed to complement our new logo. With regular updates in conjunction with our Facebook page, we aim to make more people aware of the unique role Azuki Foundation can play in their community.

From 1st November 2013 to 5th August 2014, we held 51 workshops at 4 community centres in Islington: The Claremont Project, St Luke’s Community Centre, Alsen Day Centre, and Peel Centre. The workshops were made possible by the generous support of the Big Lottery Fund’s Awards for All and Islington Council’s Community Chest (Cripplegate Foundation):

We also thank our dedicated workshop leaders, Fumi Tomioka, Katsura Isobe, and Ayaka Furukawa who ran the regular workshops throughout the year.

From Azuki Foundation’s inception, our core workshop series focused on Japanese art forms which are fun to do and which promote both well-being and cultural interest. Otedama (Japanese bean bag juggling) requires co-ordination, concentration and social interaction. Ayatori, a modern artistic version of the game ‘cat’s cradle’, can be performed alone or in groups and also requires co-ordination and precision. Workshops began with a movement-centred ‘warm up’ based on Japanese Bon dance.

During the year, we decided to try out some new cultural experience workshops, too. In April 2014, we invited arts practitioner Laura Sampson to teach a one-off demonstration workshop in Japanese Noh Theatre, a 600-year old masked music-drama which is one of Japan’s theatrical ‘treasures’. Even more recently, acclaimed theatre director Yojiro Nakagawa gave his first workshop especially for older participants, singing and moving to parts of the classic musical “Sound of Music”. Yojiro is now directing a production of Peter Pan in the West End, due to open in December 2014.

The programmes at each of the centres are reviewed below.

At the Peel and St Luke’s Day Centres, Ayatori, Otedama and Bon dance were well-received by participants throughout the year. Also, at St Lukes, Laura Sampson got participants singing and reminiscing about the theatrical past with a Noh theatre demonstration/workshop, and Yojiro Nakagawa gave his first theatre workshop for older people. Positive feedback from St Luke’s focused on our ability to engage participants and staff and to encourage physical well-being through the cultural experience:

‘participants really came alive with excitement as they remembered doing cat’s cradle as a child [which] stimulated conversation about their childhood as well as engaging the few members that do not usually participate in activities [and] encouraged dexterity for those who are otherwise generally inactive. Support staff and volunteers also participated in the workshops which helped with team building as well as having a positive impact on relationships with members.’

‘The Bon dance and Noh drama workshops encouraged older members to participate in gentle movement which was particularly beneficial to those who are generally inactive. It also provided some entertainment and insight into Japanese culture.’

At Alsen Day Centre, our core workshop activities were punctuated by even more fun activities including a music quiz, and Fukuwarai (a Japanese new-year party game). The workshops and events proved valuable for leaders and participants alike. Staff and participants at the centre thanked us for bringing “something new and diverse” to its service users, and for understanding “the special needs of the group…and [using] this in a positive way… to incorporate this [understanding] in each session so that they all got something out of it.” Participant feedback included: “I enjoyed learning a little about Japanese culture”, “they made the sessions great fun, and it was not boring”, “we all enjoyed the group – when are they coming back to us again?”

Of all of the centres, Claremont Institute welcomed the widest range of activities. We held a variety of themed workshops throughout the year, to celebrate various Japanese seasonal festivals including Setsubun (early February), and Cherry Blossom viewing (late March/early April). A group of enthusiastic participants also had the opportunity to try large-scale Ayatori and Origami. Participants were also taught some of the basic core strengthening postures of Noh theatre.

Our season finale on 11th July 2014 (held at Claremont) was an interactive workshop / demonstration, attended by a mixture of workshop participants and other members of the centre. Laura Sampson demonstrated some movement and chant from traditional Japanese Noh theatre and Katsura and Fumi led a Japanese juggling song. 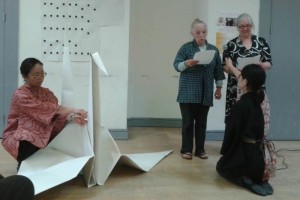 In addition to the positive verbal feedback we received, via short forms after each new phase of the workshops, written feedback from participants included a long and detailed letter of thanks to our workshop leaders, thanking them for “enriching our lives with a little bit of their extensive Japanese culture”.

Our workshops pleased participants and staff, but we were particularly happy to learn that our highly skilled workshop leaders also found these unique workshops a valuable learning experience:

Fumi Tomioka, who joined us as a workshop leader in January 2014 and who worked with us across all the centres, told us that the challenge of creating a bespoke workshop with dual focus on basic movement and specific Japanese arts, was ‘inspiring’ and ‘stimulating’:

“we talked about Japanese seasons and seasonal customs as well as doing more physical activities, including beanbag juggling and large-scale origami making. The participants were very open about responding to us directly with their comments and experiences, which created a warm friendly atmosphere with space for lots of discussions on relationships between different cultures… I am thankful that we had a lovely interesting group of people… [and] very grateful to Azuki Foundation for this precious opportunity.”

Katsura Isobe led workshops alongside Fumi throughout the year. As a dancer and Somatic Movement Therapist with nearly two decades of teaching experience, she was pleasantly surprised by the new challenge of leading movement classes from a cultural perspective:

“the participants fed the workshops with their experience and knowledge, in response to our proposals. I loved the sharing happening between us who are from different places and times, and working out how to offer some bodily experience to the participants so that they can connect it to their own past lives, and moreover, can tap into new perceptions of the world.

The sharing of experiences in the workshops helped me integrate myself as a person who has grown up in Japan and now lives in UK, which sometimes creates conflict. I see the influence in every part of my work- performing, performance making, and teaching.”

Ayaka Furukawa found that leading workshops inspired and enhanced her academic studies in Dance Movement Psychotherapy (Liverpool), and her practice of ‘facilitating creative dance movements in a variety of community settings:

“My interest, as a dance artist, is in integration, creativity and communication thorough body movements, in order to re-connect individuals with their own bodies, engage people’s originality and to share their world. I believe the underlying goal for the workshops led by Azuki Foundation aims for a new perspective of arts in culture, and to recreate cultural understanding – not just cultural exchange.

“The workshops …gave me courage in my belief towards my current research, and also reinforced the concept of how the facilitator can empower participants to support a healthy life. I strongly hope my knowledge and experience will guide me through more work with Azuki Foundation in the near future.”

All workshop leaders were pleased by the speed and openness of the feedback they received (both directly and indirectly) from participants, which allowed them to adapt quickly to the needs of particular groups, and to create the most effective workshops..

We’re delighted that Dr Mayumi Hayashiremains chair of Azuki Foundation. As Leverhulme Fellow at Kings College London’s Institute of Gerontology, Dr Hayashi has written eloquently this year about the future of care for older people and what the UK can learn from Japan’s efforts to provide a sustainable range of care and well-being solutions for its ageing population. Her latest article, written for the Health Service Journal, is entitled Japan’s integrated total care vision for an ageing population.

Find out more about Dr Mayumi Hayashi and her research.

Mr Setsuo Kato, acclaimed photojournalist and long-time Islington resident, was featured in the Guardian Weekend with his wife Jill Fanshawe Kato in an article about older people in long relationships.

Sizzle Ohtaka, one of Japan’s most sought-after singers, gave a presentation on our behalf at the Culture, Health and Wellbeing International Conference in Bristol (June 2013), which was attended by over 500 health and well-being professionals. Her performance of Tin Saguna Hana, “Flowers In Heaven” – an example of Okinawa Folk music ‘enchanted’ a large audience of delegates.

In Japan, Sizzle is no stranger to working with community groups. Her new album Dance with Toperatoto (released May 2014) features folk songs from the remote village of Hachi in Niigata prefecture, sung by a chorus of school children and older people.

The original story was written as a picture book by renowned author Seizo Tashima, and was also inspired by the village of Hachi. In the spooky tale, three pupils from a closed-down school encounter a ghost named Toperatoto, who eats children’s’ memories.

Dr Herbeth L. Fondevilla is a researcher of Japanese Popular Culture and Community-based arts initiatives at the University of Tsukuba, Japan. Recent publications include ‘Local and Contemporary’, a comparison of two different arts-based community projects (Asia Pacific Journal of Arts and Cultural Management).

Following on from her latest paper on the new ‘Art in Hospitals’ initiative in Tsukuba, Dr Fondevilla has brought the concept into being in the UK, in collaboration with Norfolk and Norwich University Hospitals. The event, called Supernatural Garden, featured Japanese artists Daichi Konaka and Professor Yuko Ono, who brought together students, locals and hospital patients through a variety of arts activities during the weekend of 13-14 September 2014.

We have come to the end of an action-packed first full year, and this coming year will be full of similarly rewarding workshops in Japanese culture and movement. We’re also very excited to be able to kick-start a new Japanese Home Cooking Project at Central Cookery School, thanks to the Great Britain Sasakawa Foundation.

Japanese cuisine is widely considered to be among the healthiest in the world; we can’t wait to share some simple and delicious recipes with the very people whose health and well-being are so important to us.

Finally, our warm and heartfelt thanks go to Ms Yvette Ellis , the Development Officer Voluntary Action Islington. From the outset, she found the time to advise us at various points, in spite of her super busy schedule.

If you would like to donate to Azuki Foundation please email [email protected].